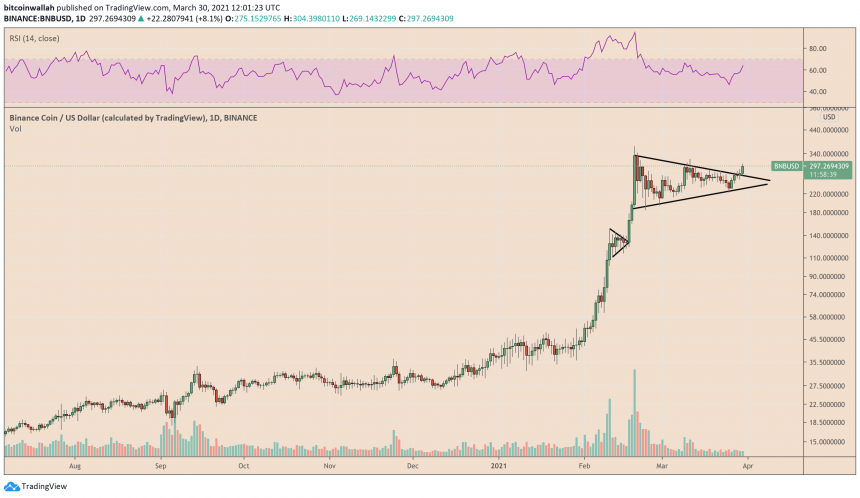 Binance Coin, or BNB, surged more than 8 percent on Tuesday, hitting $304.39, the highest level almost three weeks after PayPal announced that its US customers could use their cryptocurrency holdings to pay at millions of its online merchants globally.

In comparison, bitcoin rallied up to 2.93 percent, and ether, the second-largest crypto after bitcoin, surged 1.89 percent.

In retrospect, Binance Coin entered a consolidation phase following its strong uptrend that saw its prices surged by almost $200. The cryptocurrency traded inside a triangle range later, with its daily volumes declining as the sessions matured. That — technically — raised BNB’s prospect of breaking the Triangle pattern to the upside.

BNB promises bullish outcomes because Symmetrical Triangles are continuation patterns — they tend to push an asset in the direction of its previous trend. Technically, the token could surge by as much as the previous uptrend’s height (which is about $200). Therefore, the Binance Coin breakout target is near $470.

BNB acts as a de-factor settlement token across the Binance ecosystem, including a cryptocurrency exchange and two blockchains: Binance Chain (BC) and Binance Smart Chain (BSC). Binance’s revenue comes from trading, withdrawal, listing, margin trading, and other fees such as automated algorithm trading orders — all payable via BNB.

Meanwhile, Binance burns a portion of its BNB treasury based on volumes. At the current burn rate over the last 12 months (LTM), there are six more years until Binance burns its maximum 100 million tokens. The next event is on April 15.

PayPal’s strengthening foothold in the cryptocurrency market expects to boost crypto adoption. Exchanges like Binance Coin could benefit the most from an influx from the mainstream markets, which would mean higher revenue (via BNB), and more volumes (higher burning rate; low BNB supply against the rising demand).