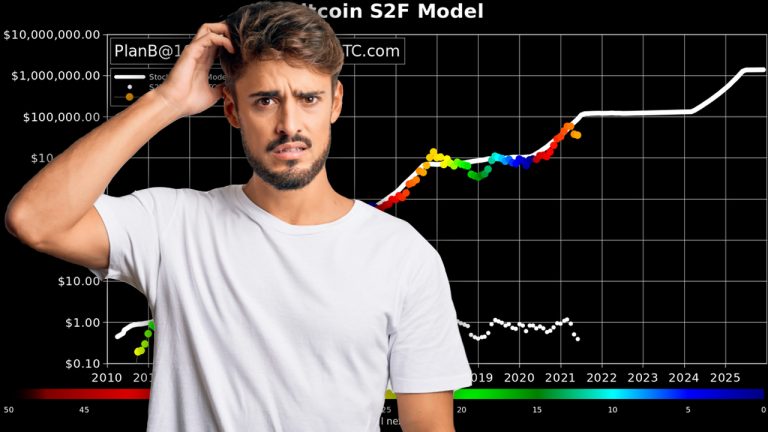 During the last week, crypto enthusiasts and traders have been discussing the stock-to-flow (S2F) bitcoin price model created by the pseudonymous crypto analyst “Plan B.” Despite Plan B’s worst and best case scenario calls on June 20, a touch over a week later the analyst said the “next 6 months will be make or break for S2F.” Currently, the S2F model has seemingly run off course and resembles the levels it saw in January 2019.

S2F Skepticism and the ‘Make or Break’ S2F Timespan

There’s some skepticism toward Plan B’s infamous stock-to-flow (S2F) bitcoin price model ever since the closing price in June recorded below the S2F’s projected course. The model’s creator, however, would not necessarily use the terms “off course” but “just touching lower bands.”

My on-chain data (color overlay in the chart below) tells me this bull is not over and 64K was not the top. That is in line with s2f(x) model. Also my floor indicator (not based on s2f) says we will not go below 47k Aug close. pic.twitter.com/K6Hfjdp26x

Others assume that bitcoin is just not getting attention as the media is highlighting the gains made by shiba inu (SHIB), baby doge (BABYDOGE), and dogecoin (DOGE).

“Hard to take bitcoin seriously when the mass media is spouting out articles about dogecoin and shiba inu. We are going to $10,000,” an individual responded to Plan B’s “make or break” tweet. Another individual replied to Plan B’s assessment with more optimism.

“Even in the bear market of 2019 BTC tripled in a few months…… 100K is secured, [a] very low target in current bull market.” Plan B responded to the individuals “very low target” tweet and said:

Indeed. And I must say [the] 2019 bear market (when I published S2F model btw) felt much much worse than [the] current ‘China ban’ dip.

Others believe bitcoin (BTC) prices are a bargain right now and a chance of a lifetime purchasing opportunity. Lex Moskovski, chief investment officer at Moskovski Capital shared this type of assessment on Saturday.

“Negative Stock-To-Flow deflection is the highest it’s ever been in the whole bitcoin history,” Moskovski said. “This is a great buying opportunity, if you’re a believer in this model.” Still, even after Moskovski’s positive sentiment, a few skeptics think that the bubble has burst.

“I would like to believe any bullish Glassnode indicator, however, the increasingly overwhelming reality is that the bubble is bursting once again,” the person said in response to Moskovski’s tweet. “Retail is gone, many have probably again forgot that crypto even exists.”

Another person asked Moskovski when Plan B would stop standing behind the price model. “I wonder what deflection it will take for Plan B to admit the model is nonsense,” the individual remarked.

After a few reports that came out about Plan B’s S2F bitcoin price model, one article leveraged the term “off course.” The pseudonymous crypto analyst disagreed with the terminology that was used in a specific article’s headline. “Nah,” Plab B tweeted in response to the headline. “S2F model is not “off course” .. just touching lower bands (just like Jan 2019 and Mar 2020).”

What do you think about Plan B’s price model touching lower bands and his recent “make or break” tweet? Let us know what you think about this subject in the comments section below.