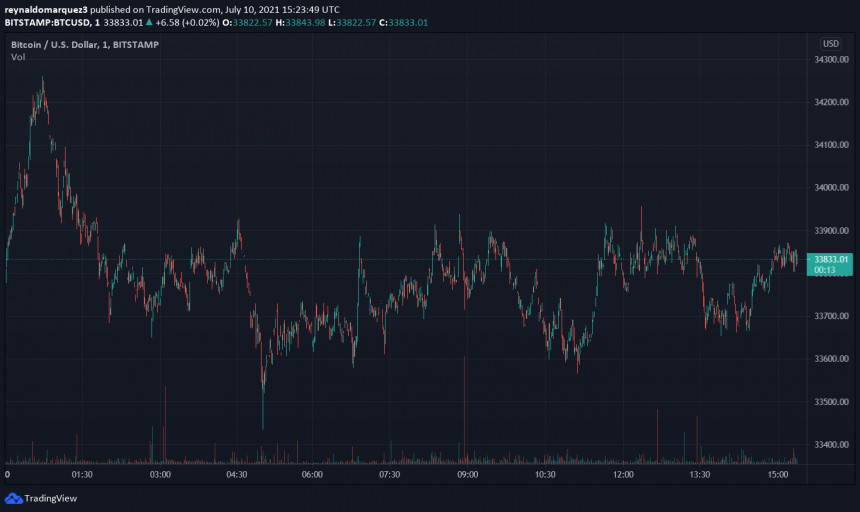 Bitcoin continues to be stuck in its current range. The first cryptocurrency by market cap has been unable to display clear conviction. The bears have momentum and could go on the offensive soon. At the time of writing, BTC trades at $33,793 with sideways movement across the board.

Pseudonym analyst “Coin Casanova” has compiled bearish on-chain data that suggest more downside for Bitcoin in higher timeframes. Similar to many traders and investors, Casanova feels that some on-chain experts have shared analysis to call the BTC’s price bottom but are unable to do the same where there are “top” signals.

The analyst claims that Bitcoin seems weak enough to be pushdown by any significant increase in selling pressure. As a first target, Casanova believes Bitcoin could retrace below its yearly open and touch the $28,000.

In higher timeframes, the analyst suggests keeping a close eye on the number of short-term holders using Glassnode’s Bitcoin Realized Cap HOLD Waves. When this metric rises about 80%, BTC’s price experiences a prolonged downside or long period of accumulation. The analyst added:

(…) short term holders: above 80% has mark top before, I believe we need them to completely drop out and back to 20% range

When the same metric is applied to long-term holders, the analyst finds bullish that Bitcoin whales have started to reaccumulate. However, it could take a long time for the rise in this metric to impact the market, as seen below. In the meantime, BTC’s price could drop further.

long term holders: we finally making a curve-ish upward, so whales are starting to accumulate but it is clear that we DONT actually BOTTOM until at least we get them back to 50% range.

Casanova claims that Bitfinex whales have been playing a major role in the recent BTC price action. While some analysts, Casanova added, use on-chain activity such as the increase in addresses to support their bullish narrative, this metric can also indicate that large investors have been more active in the past months.

China’s crackdown on the BTC mining sector and the crypto industry has had consequences. Whales have been moving their funds, increasing selling pressure in the market, and affecting Bitcoin’s performance, as seen below.

Finally, the institutional adoption of BTC could be under a pause phase. Many experts, Casanova said, exaggerate the influence of these players in the current price action. Some announcements have been made from traditional titans like George Soros’ hedge fudge, but this is insufficient to drive a sustainable rally.

Since May and June’s crash, the level of institutional participation in the crypto market has remained “flat”, the analyst said.

6/ "Institution are buying"
Yah okay. Not enough bro. Not enough.
Flat af since the drop. pic.twitter.com/YkBGODEhG8

Bitcoin is going through one of its most singular moments since its inception, big players must make a comeback to add new fuel into BTC’s price. For the time being, the first cryptocurrency by market cap could remain locked in its current range.