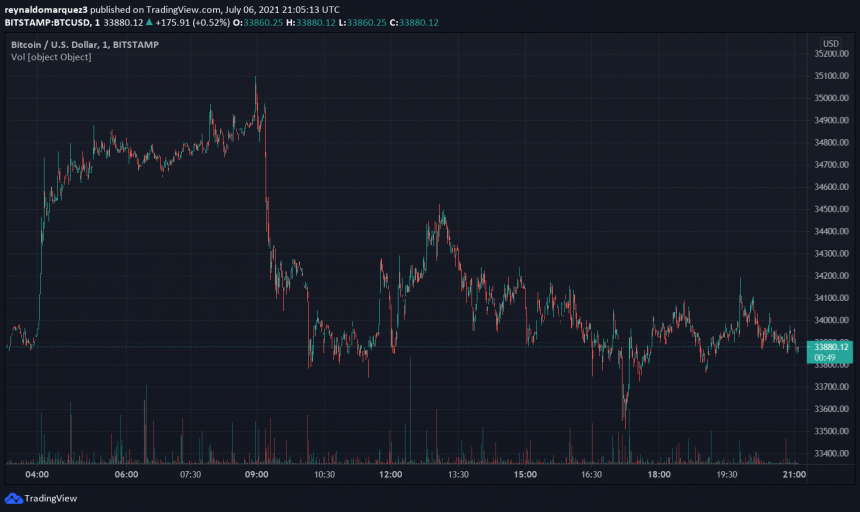 Bitcoin has been moving sideways as the rest of the crypto market, especially Ethereum and the DeFi sector, show strength. The first cryptocurrency by market cap needs to make a decisive move to break out of its current range but could face downside in the short term, some recent reports claim.

Banking giant JP Morgan released a report written by its strategists Nikolaos Panigirtzoglou on the alleged bearish signals caused by the coming Grayscale Bitcoin Trust (GBTC) shares unlocking. The analyst expects this event to be a headwind for Bitcoin during July.

This investment product allows its holders to sell their GBTC shares only after a 6-month lockdown period. Panigirtzoglou expects investors to liquidate their shares worth around 140,000 BTC worth of shares. Thus, they will create selling pressure in an already weaken BTC’s price.

This bearish theory has been gaining momentum and raised concerns amongst investors and traders. Alex Mashinsky CEO at Celsius Network shares this vision and predicts BTC’s price to drop in the coming weeks.

This will be the third and final capitulation event, according to Mashinsky, before Bitcoin resumes its rally towards $100,000 by the end of 2021. The unlocking is due by around mid-July. During this period, the GBTC discount will increase to 25%, Mashinsky said.

Later, he predicts that some hedge funds will want to leverage the arbitrage opportunity between Bitcoin’s price in the spot market and the GBTC discount. Thus, they could short BTC and purchase GBTC with a higher discount.

The Most Bullish Scenario For Bitcoin? A Path Towards $100K

On-chain analyst Willy Woo thinks there are two potential impacts. Their interactions will determine how the crypto market will be affected. However, he expects the GBTC unlocking to be predominantly bullish in the short term.

JP Morgan is bearish on the GBTC unlock coming up.

Here I’ll go through the inner workings so you can make up your own mind.

There’s 2 impacts, one bullish, one bearish. The key is in how they interact. IMO it’ll be immediately bullish.https://t.co/xcfMbhCBPP

The GBTC is structured to receive BTC without it ever leaving the trust. Thus, Woo said that the only way for this product to reduce its holding it’s via the 2% fee charged by Grayscale. In the derivatives sector, investors can buy BTC in the spot market to purchase GBTC while taking a short position.

In doing so, they can hedge their position while they receive money from their short. When the unlocking period comes, investors can sell their GBTC shares and close their short. This is a bullish case since investors must buy BTC on the spot to acquire the shares.

At the moment, for this trade to be profitable, Bitcoin must stand above its yearly open, around $29,000, by the time the unlocking takes place if investors bought the shares back in January. Hedge Fund and other major players invested in the GBTC have incentives to hold that critical support.

The second impact could take place in the spot market. The unlocking would cause the GBTC premium to drop and could motivate investors to purchase shares instead of Bitcoin on the spot. Woo added:

(Impact 1) is sudden and directly impactful than while (Impact 2 2) acts very slowly. Thus it’s a bullish. The over all impact over the long term is neutral as it’s all arbitrage which balances out in time. What we are analysing is the short term demand/supply imbalances which may impact price.

Other experts failed to see the connection between the unlocking and BTC’s price. In any case, July seemed poised to be a decisive month for the overall market. The bulls could finally receive the push the need to re-enter price discovery mode.