An Arcane Research report has revealed that Bitcoin daily trading volume has dipped to the lowest point of 2021.

Bitcoin Activity Seems To Be Slowing Down

As BTC’s price continues to stagnate, the daily trading volume on the leading spot exchanges has dropped to the lowest it has ever been in the year 2021.

Here is a chart that displays how the Bitcoin daily trading volume has changed over the past one year:

The above graph shows that the BTC daily trading volume on exchanges is now the same as it was in mid-December of 2020.

Another notable thing from the chart is that the highest spike was when the BTC market was the most volatile. Which makes sense, as more people move their investments when the price is going up or down.

At the moment, the 7-day average of the Bitcoin daily trading volume stands at around $4 billion.

The data is backed by the fact that the value of the all exchanges flow ratio, another BTC indicator, has hit a 9-month low.

What Could It Mean For The Price Of The Cryptocurrency?

There could be a few possible reasons for the slowdown of Bitcoin’s activity. The most prominent one might be the stagnating market.

For a few weeks now, the coin has been stuck between the $30k and $35k price points. The market is behaving as a rangebound one where investors buy at the support line and sell off at the resistance point.

Many investors aren’t interested in buying BTC in such an environment, and that has lead to the low activity on exchanges.

At the time of writing, Bitcoin is floating around the $34k point. It’s down almost 6% in the past 7 days.

The market has shown no signs of improving from the almost 50% crash that it suffered after China reiterated its crypto ban. The currency has also suffered a few minor crashes afterwards caused by the nation’s crackdowns on BTC mining hubs.

Here is a chart showing the trend of the cryptocurrency over the past 6 months: 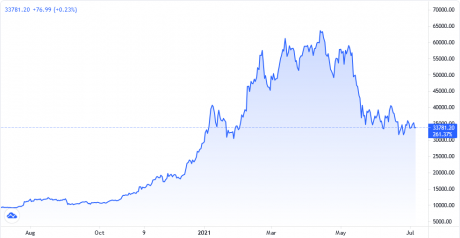 Not too long ago, the price of BTC fell below the $30k mark, but before a bear market could take hold, the crypto was pumped back into the $30k-$35k zone.

It’s unclear when Bitcoin will be able to escape this zone, and it’s also hard to say what lies ahead. There could be a bear market waiting. Or perhaps, another bull run could be happening.