New Litecoin All Time Highs Are Still In The Cards

New Litecoin All Time Highs Are Still In The Cards 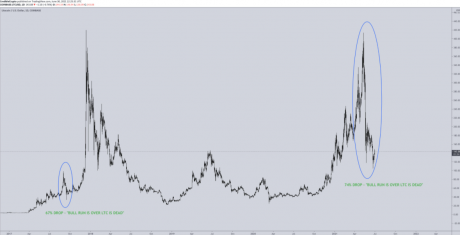 After a week of trending upwards, Litecoin could finally be poised to rally above the $160 target. The coin traded at or above that number for nearly half the year. From the beginning of February until the middle of June, LTC was on a bull run until the entire market’s fall last month.

But, traders around the crypto world are bullish on the coin and its future. Especially considering Litecoin’s ability to make blockchain transactions faster, and more efficient.

One pseudo anonymous trader on twitter, is optimistic that Litecoin will see a rebound to all time highs in the coming months based on fractals. He stated in a tweet yesterday,

Seeing a lot of people saying $LTC had its “bull run” and it’s headed to the grave. I don’t trade fractals, but I do think we will see something similar to what we saw in 2017 on the left. Not just for $LTC but for much of the “old guard”. Still think new ATH is on the cards. pic.twitter.com/g9YUyvJ90P

Trading fractals can be very difficult to judge especially with assets like crypto that have not been around for quite as long as traditional stocks so therefore have less plot points for investors to use. However, all analysts can do is use the data available.

For Litecoin, in October of 2017 there was a large drop of 67% in price. Right after that, the crypto took off to all time highs to date. Now, in June of 2021 analysts are seeing that LTC had a 74% drop in price. Could this distinct drop be the trigger for it to take off again to prices yet unseen? Only the next few weeks can tell but with the market overall potentially reaching its floor in the past few weeks, Litecoin could certainly be on the verge of taking off again.

Related Reading | Grayscale Loads Up On Litecoin, Dumps BTC & Other Coins, But Why?

Can Litecoin Continue Trends From The Past Week?

It remains to be seen whether Litecoin will continue the bull trends from last week. But, if the fractals shown are correct, we may see another surge in the price of LTC as well as other cryptocurrencies.

With a faster block time and very low transactions fees, Litecoin is perfect for micro transactions and point of sale systems.