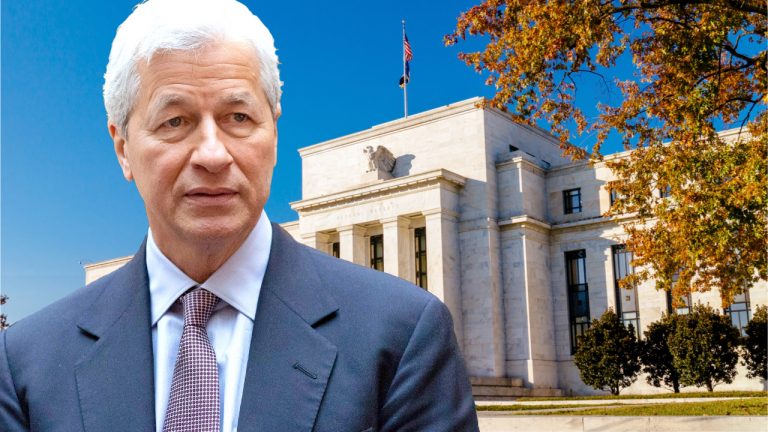 Investment bank JPMorgan Chase is stockpiling cash according to the company’s CEO Jamie Dimon. The investment banker doesn’t seem to believe inflation is “transitory” and he thinks there’s a “very good chance” inflation could stick around.

JPMorgan Chase CEO: ‘I Do Expect to See Higher Rates and More Inflation’

At the end of April, Bitcoin.com News reported on the Federal Open Market Committee (FOMC) and explained how FOMC members said the benchmark interest rate will be kept near zero. Moreover, members of the FOMC also said the committee wasn’t too concerned about inflation, but admitted inflation may have “transitory effects” on the American economy.

JPMorgan Chase’s boss doesn’t believe this is the case, according to his recent statements. While telling the public he warned people about cryptocurrencies at the end of May, Dimon recently warned of runaway inflation, alongside Larry Summers’ inflation predictions.

On Monday during a conference, Dimon reiterated his inflation forecast and noted that his financial institution was “effectively stockpiling” cash. The reason JPMorgan Chase is hoarding cash is because Dimon thinks inflation won’t be temporary.

“We have a lot of cash and capability and we’re going to be very patient, because I think you have a very good chance inflation will be more than transitory,” Dimon explained at the conference. Dimon further asserted that JPMorgan Chase would be prepared for incoming inflation levels and higher rates.

“If you look at our balance sheet, we have $500 billion in cash, we’ve actually been effectively stockpiling more and more cash waiting for opportunities to invest at higher rates,” Dimon stressed. “I do expect to see higher rates and more inflation, and we’re prepared for that.”

Dimon is not the only investment mogul who believes inflation may slow the American economy, as many others have warned about the Federal Reserve’s monetary easing policy. The founder of northmantrader.com Sven Henrich continues to criticize the U.S. central bank’s behavior.

“The Fed has skewed wealth inequality to unjustifiable levels while making [the] cost of living increasingly unaffordable for many, and in process have blown a historic asset bubble that, if and when it blows up, will hurt everyone,” Henrich said on Tuesday. Henrich added to his scathing criticism by saying:

The institutional arrogance is mind-boggling and there does not appear anyone on that Fed board with any backbone and sense of responsibility to stand up and say: Enough.

In another conversation during the broadcast Closing Bell, Morgan Stanley CEO James Gorman told CNBC’s Wilfred Frost that he doesn’t believe inflation will be transitory and the Federal Reserve’s hand may be forced to raise interest rates.

“The question is when does the Fed move?” Gorman remarked. “It has to move at some point, and I think the bias is more likely earlier than what the current dots suggest, rather than later,” Morgan Stanley’s CEO added.

Gold bug and economist Peter Schiff thinks that the American populace, however, seems “to be even more confident now that inflation is transitory than they were before we got all this really bad data.” Instead of stockpiling greenbacks, like JPMorgan Chase’s boss Jamie Dimon is doing, Schiff detailed he would assume dollars would be ditched in an effort to escape from falling values.

Schiff stressed that right now the opposite is taking place, and he said he honestly doesn’t understand why businesses are stockpiling greenbacks. Of course, the economist shilled his favorite shiny yellow commodity on the podcast as well, and said smart people will purchase gold as a hedge against this financial disaster.

“In the long run, anybody who actually understands the significance of what’s going on would be taking advantage of these market moves to sell dollars into the rally and buy gold into the dip because the bigger moves obviously are going to be down in the dollar, way down in U.S. Treasuries, which represent future payments of dollars, and a big move up in gold,” Schiff concluded.

What do you think about Jamie Dimon’s statements about inflation and JPMorgan Chase stockpiling cash? Let us know what you think about this subject in the comments section below.