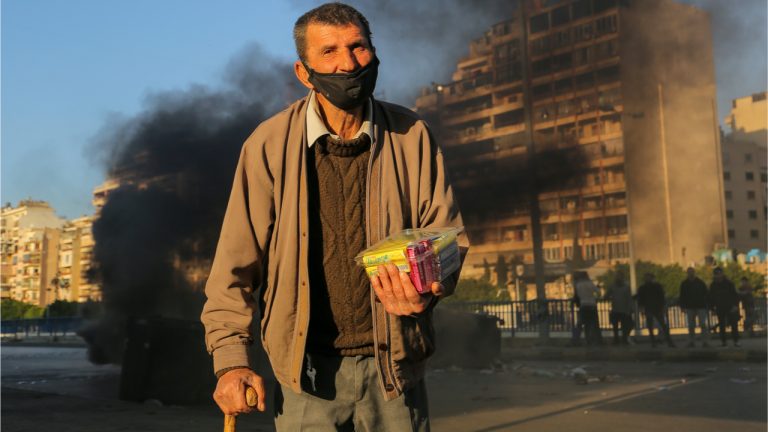 The Lebanese pound dropped to a new low on Sunday against the greenback trading in the low 1,500s range to the U.S. dollar. Lebanon’s currency has been in a downward spiral since 2019, as the pound has lost 90% of its value since then. Reports note that Lebanese citizens are facing shortfalls on basic goods like food and medicine, as attestations say “shortages have been worsening across the board.”

Lebanese Pound Sinks to a New Low Against the Greenback, Country’s Monetary System Is Collapsing

Essentially, the Lebanese government overspent reserves, leveraged foreign aid, and “balanced its books with tourism receipts” after the civil war. The country’s leaders borrowed to build skyscrapers, eateries and designer boutiques, luxury shopping malls, and more. Reports note that it was so bad after the civil war, economists referred to Lebanon’s financial system as a “nationally regulated Ponzi scheme.”

“The deliberate depression” is perhaps the most accurate description of the unprecedented economic collapse in Lebanon.

The latest accounts on Sunday from Reuters detail that the country’s economy is in deep turmoil and highlight how Beirut’s electrical plants can’t even keep the grid going regularly. Other accounts littered across social media tell the worsening tale of Lebanon’s current financial crisis.

“Lebanon’s social fabric is changing rapidly: people falling into poverty, those who can are leaving the country, and you have those who are making money on the backs of others. This crisis is worse than the 1980s when Lebanon’s economy collapsed,” one individual tweeted this week about the situation.

“Already accomplices to this economic collapse due to years of corruption and mismanagement, #Lebanon’s leaders have been reviled for their limited response.

“Times are tough in Lebanon; the economy’s in shambles; people are worried,” another account of the economic situation in Lebanon details.

A group that discusses the “ongoing socio-economic conversations” called “The Democratic Economy” asked its Twitter followers about the situation. The account asked its followers if they thought introducing cryptocurrencies, as a possible solution to Lebanon’s economic troubles would be a good idea. The Twitter account @Democraticecon said:

In light of the financial crisis and the collapse of the monetary system in Lebanon, people are looking for alternative systems to banks and solutions to the current crisis. One of the proposed scenarios is the use of digital currencies. What about Cryptocurrency?

“Gas stations in Lebanon going out of business,” one individual further wrote on Friday. Reuters confirms the issues with petroleum stations and notes there are long lines at existing gas stations and fights starting over who can fill their automobiles with gas first. Pharmacies are not operating because of medicine shortages and a few hospitals are choosing to do emergency services only.

Lebanon’s prime minister-designate Saad al-Hariri and president Michel Aoun attempted to address the situation. But both leaders have been having issues holding the political reigns after numerous Lebanese officials resigned following the Beirut port blast in August.

Protests in #Lebanon condemning the economic collapse and a strike by pharmacies. pic.twitter.com/Yn0bDOrDPp

Additionally, people have been worried about the country’s solvency issues, as Lebanese banks locked depositors out of their dollar accounts last year. Then the central bank said funds could be withdrawn but at a rate of 3,900 pounds to a single U.S. dollar. Depositors with USD were promised that next month they could get better access to their funds.

“The Lebanese people are held hostage by the Iranian militia”

Meeting with Minister and Major General Ashraf Rifi @Ashraf_Rifi
On Iran’s Penetration in Lebanon, economic Collapse, and Lebanon’s Relations with the Gulf
Via: Dr. @tarekchindeb https://t.co/x0mpZXtJVl

The funds could be withdrawn, at a rate not exactly close to the global average, but much closer than the one-third withdrawal offering that was allowed previously. However, the International Monetary Fund (IMF) had denounced Lebanon’s dollar deposit withdrawal scheme on Thursday and stressed the country needs to fix its economic policy and issue broader reforms.

While Lebonese Officials Court the IMF, Citizens Go Without Manoucheh

The IMF wants to negotiate with Lebanon and believes the country’s impending capital control law and the proposal for dollar deposit withdrawals could lead to much higher inflation. Meanwhile, much of this negotiating with the IMF is essentially just bureaucrats and Lebanese high-net-worth individuals.

The majority of the nation is drowning with infrastructure issues, as the nation’s residents can’t even afford basics like clean water and manoucheh. Reports detail that even in Beirut’s most affluent neighborhoods, small manoucheh furns (bakeries) can’t stay in business because no one has funds. The country’s wealthy, besides the current bureaucrats running the nation state, have all left Lebanon long ago.