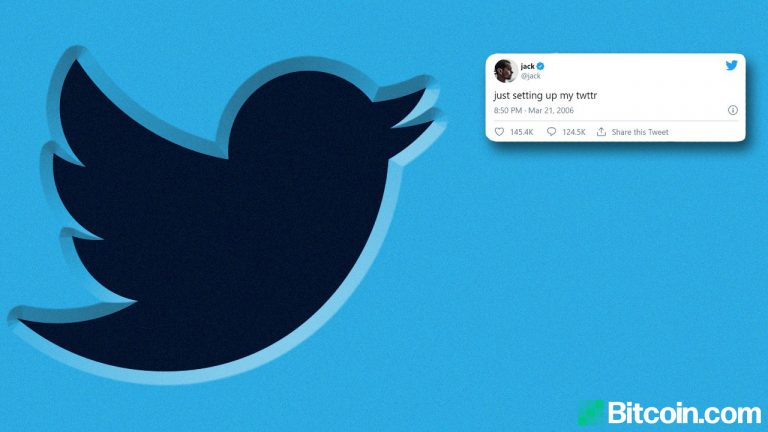 The cryptocurrency community is in a tizzy this weekend after the founder of Twitter, Jack Dorsey, tweeted about a new application that allows people to purchase tweets with ethereum. The application is called Valuables and it allows individuals to purchase a digital certificate of the tweet, which is signed and verified by the tweet’s creator.

Tokenization and non-fungible token (NFT) asset industry have swelled during the last six months and a great number of artists, celebrities, and social luminaries have jumped on the bandwagon.

There have been 5,368,992 NFT sales equating to $381 million in sales to-date since nonfungible.com started tallying up the market history. Now a project called Valuables or the Web3 compatible web portal v.cent.co is attempting to make tweets valuable by tokenizing them via the Matic blockchain. But there is a lot of controversy over whether or not tweets can be valued and stored in a meaningful way on a blockchain.

On March 5, 2021, Jack Dorsey the founder of Twitter and Square Inc., tweeted about the project with a tweet that he is selling.

At the time of publication, the founder of the Tron blockchain, Justin Sun, has bid $1 million dollars for a tweet Dorsey created back in 2006. The CEO at Bridge Oracle, Hakan Estavi, outbid Justin Sun and is now offering $1.5 million in ether for the tweet. The two have been going back and forth in a bidding war for the Dorsey tweet being sold on Valuables.

The tweet from 15 years ago is when Dorsey wrote “just setting up my twttr.” With the Valuables program, Dorsey certified his tweet from 2006 and people can offer to buy the digital certificate of the tweet with ethereum (ETH).

Concept Sparks Criticism Toward Tokenizing Tweets on a Blockchain

Of course, not everyone in the crypto space is impressed with the Valuables project and many people think the application’s real-world value is worthless. Meanwhile, many people said that Bitcoin maximalists were just jealous and the Valuables tokenization of tweets idea is innovative. “Welcome to Ethereum, Jack,” one Ethereum proponent tweeted in response to Jack’s sale. “Surely, you will fetch a good price for this tweet. However, the cope and salt from the maxis: priceless,” he added.

Despite the NFT and tokenization fans, a myriad of crypto proponents seemed disillusioned by the concept of selling tweets.

“What happens if you buy someone’s tweet and then they delete it?” software developer Jameson Lopp tweeted. Also, how can you audit the ecosystem to ensure that a tweet hasn’t been sold multiple times? Point being, I suspect your ownership claim is quite weak. This looks like a prestige system, not an ownership system,” Lopp added.

On March 5, the CEO of Kraken Jesse Powell wrote that the purchasing of tweets may open Twitter to a whole lot of security vulnerabilities. “This whole buying tweets thing is putting bounties on Twitter account takeovers,” Powell insisted. “Hope you all are using U2F security keys and not SMS for account 2FA/recovery.” A number of people agreed with the Kraken founder’s assessment on Friday afternoon.

Meanwhile, Dorsey’s 2006 status on the Valuables platform is not the first time that specific tweet has been tokenized. There’s already an existing application called Tokenized Tweets (@tokenizedtweets), which has been around since 2019.

Dorsey’s 15-year-old tweet was first tokenized using the Tokenized Tweets platform on June 17, 2020. The Valuables FAQ says that tweets can “only be minted once on Valuables, [but the] NFT though can be bought and sold an unlimited number of times.” It begs the question: Which Jack Dorsey March 21, 2006, tokenized tweet is more valuable? Some would say, however, Dorsey’s NFT mint is more valuable because he certified it using the Valuables application.