Global investment bank Goldman Sachs is seeing huge institutional demand for bitcoin with no signs of abating. A survey of Goldman’s institutional clients shows that 61% expect to increase their cryptocurrency holdings. Meanwhile, 76% say the price of bitcoin could reach $100,000 this year.

He explained that his team conducted a cryptocurrency survey across the firm’s institutional client base, from “hedge funds, to asset managers, to macro funds, to banks, to corporate treasurers, insurance, and pension funds.” He clarified that “all of our institutional client discussion is really focused around bitcoin.”

His team received responses from 280 institutional clients and published the results of the survey this week. “What’s been particularly interesting,” according to McDermott, was that “40% of the clients currently have exposure to cryptocurrencies,” which he explained could be in any forms, from “physical through derivatives, through securities products, or other offerings in the market.” The executive revealed:

In terms of institutional demand, we have seen no signs of that abating … We see a huge amount of demand institutionally, [and] we’re also seeing that reflected in the private wealth management space as well.

He further described that “corporate treasurers, for example, they’re interested in two different aspects.” The first is whether they should be “investing in bitcoin on their balance sheet,” McDermott detailed, citing that “the key drivers from their perspective are negative rates … [and] just the general fears around asset devaluation.”

In addition, he said that they are also thinking “should we consider it as a payment mechanism? … particularly in the context of Tesla’s announcement.” Elon Musk’s electric car company, Telsa, said that it invested $1.5 billion in bitcoin in January and will soon be accepting the cryptocurrency as a means of payments for its products.

Out of the institutional clients that have crypto exposure, the survey shows that 41% own physical or spot crypto. McDermott emphasized:

61% of the clients expect their digital asset holdings to increase over the next year. 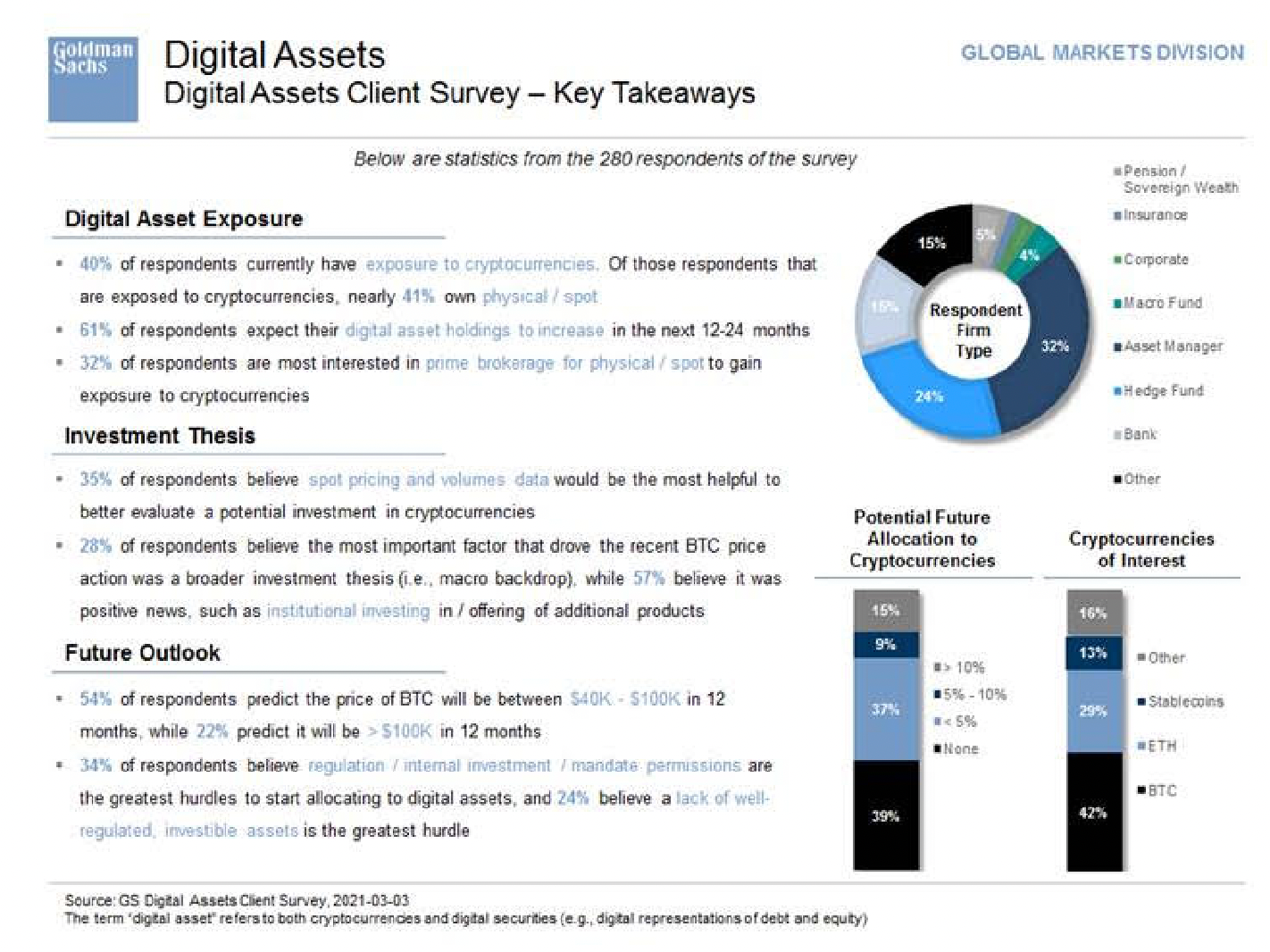 As for the future outlook of cryptocurrencies, 54% of respondents predict the price of BTC will be between $40,000 and $100,000 in 12 months while 22% predict it will be more than $100,000. This price level is not far-fetched as several fund managers are predicting the same, including Skybridge Capital and Mike Novogratz.

“In terms of the price action, I think it’s very difficult to predict bitcoin. It’s not an easy pastime,” McDermott opined, elaborating:

“I was on a similar survey with a private roundtable recently and the results there echoed something quite similar where 33% were predicting over $80,000 by the end of the year,” the Goldman executive further shared.

What do you think about Goldman Sachs’ view on bitcoin? Let us know in the comments section below.