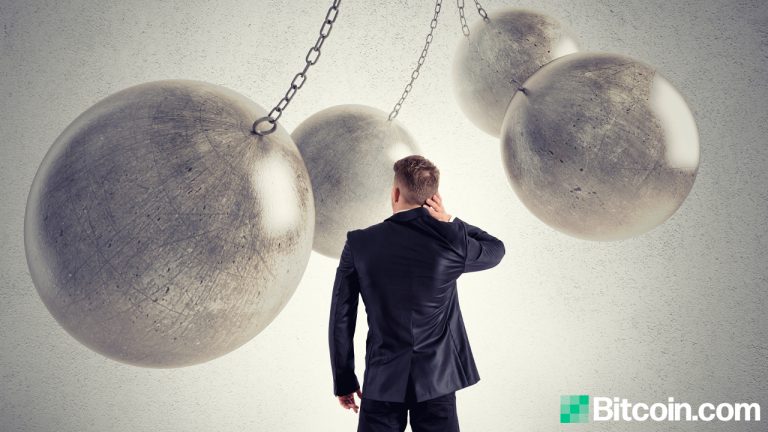 The U.S. Federal Reserve is in a predicament as fiscal deficits erode the American economy and the nation is seeing a spike in benchmark 10-year Treasury yields. Meanwhile, Federal Reserve Chairman Jerome Powell expressed zero worries about inflation during an interview at a Wall Street Journal Jobs Summit on Thursday. Powell didn’t explain when the easy-money policies would end and after his commentary, U.S. bonds and stocks saw a massive sell-off.

The US Fed Juggles Shaky Treasury Yields and Easy-Money Policies

On March 3, 2021, Reuters reported on how the benchmark 10-year U.S. note saw some steep declines for three days straight ahead of the Federal Reserve Chairman Jerome Powell interview at the summit. But then Treasury bond yields spiked, which gave market investors the impression that easy-money policies would be stifled. Moreover, Fed Governor Lael Brainard discussed the concerning bond yields before Powell’s summit interview as well. This was after the fact that Powell sat in front of the Senate Banking Committee and the Chairman dismissed Treasury yield concerns.

The following day, Powell exchanged dialogue with Wall Street Journal (WSJ) reporters and again shrugged off the worry over Treasury yields. Stocks and Bonds sold off almost immediately in a market downturn, as Nasdaq was down -274, NYSE -239, and the Dow Jones Industrial Average -345. Powell’s lack of concern and his commentary in regard to the Treasury yields and inflation was highlighted in a WSJ report that followed the Fed Chairman’s statements.

“We expect that as the economy reopens and hopefully picks up, we will see inflation move up through base effects,” Powell said during the conference. “That could create some upward pressure on prices. Today we’re still a long way from our goals of maximum employment and inflation averaging 2% over time. We’d want to see inflation sustainably above 2% and we’d want to be on track for inflation to run sustainably above 2%,” Powell added. Without the market getting reassurance from the Fed Chairman, participants sold treasuries and equities at a rapid rate.

Interestingly, Powell’s statement’s affecting the market negatively, also seemingly trickled into precious metals and cryptocurrency markets as well. Gold prices were down on March 4, to $1,693 per ounce and silver prices were also down to $25 an ounce.

Billions of dollars in value were also shaved off the crypto-economy on Thursday as BTC dropped from $51k to above $48k during the early morning trading sessions, and then to $46.5k by the evening trading sessions (ET). 24-hour stats show bitcoin (BTC) lost around 9% since Powell’s statements.

First off, Costa’s Twitter thread explains that U.S. fiscal deficits are at their worst level in 70 years. So horrible in fact, that Costa thinks this will spur a “record Treasury issuance this year.” He noted how the Fed alongside U.S. lawmakers already stacked up $2.2 trillion with the CARES Act bill.

“Then, an additional $900 billion of stimulus in December,” Costa says. “With the decline in tax revenues and other discretionary and non-discretionary outlays, the government had to issue $4.4 trillion of net new debt in 2020 to fund these programs,” the portfolio manager adds. “To fund this operation, the Fed purchased $2.4 trillion of these Treasuries or 54% of the total issuance. Equating to an average of $197 billion per month.”

In 2021, if the Fed decides to stick with the $80 billion/month plan, it would be 60% less than what they did last year. The math does not add up. Fiscal spending is likely to be significantly higher. The Biden administration is now planning on a two-stage stimulus package: rescue and recovery. The ‘rescue’ will be close to $1.9T.

With all the Fed’s cards on the table, Biden’s recovery package “needs to be passed in the coming weeks before unemployment benefit programs are exhausted of money. In other words: A tsunami of Treasury issuances is likely underway,” Costa said.

He also highlighted that U.S. Federal net receipts are rolling over which is putting the Fed in another pickle. The Crescat executive believes that foreign investors and U.S. banks won’t be able to fund all this debt. “The ball is clearly on the Fed’s court,” Costa insisted.

Because the American populace continues to allow financial irresponsibility, the current and the next generations of U.S. taxpayers will pay the toll for these debts.

“In our analysis,” Costa writes. “The Fed will have no choice but to substantially increase its planned quantitative easing. After all, the central bank is the lender of last resort. But U.S. taxpayers will also be on the hook. Throughout history, an increase in income tax rates tends to follow a period of large government spending. It is only a matter of time until this becomes an even more discussed topic,” the Crescat analyst details.

Even though Powell told the markets the lies he assumed everyone wanted to hear, the bond market vigilantes didn’t believe him. His inflation denial is no longer credible. He may be forced to tell the truth. Admit inflation is a problem, but that the Fed will do nothing about it.

“The earliest the Fed will start talking about tapering [monetary easing policies] is late 2021, with any discussion of interest rate hikes only coming a year after that,” Tilton explained. Meanwhile, all of these factors have hardened the mindsets of BTC bulls and precious metals fans alike. Some PM fanatics like Peter Schiff believe only PMs like gold and silver will benefit from the unprecedented monetary stimulus.

Nevertheless, there are plenty of crypto proponents that believe the Fed’s easing programs will bolster BTC and the digital asset economy. While others think that there’s room for both precious metals and cryptocurrencies in a world dominated by central planners who don’t take responsibility for their reckless spending.