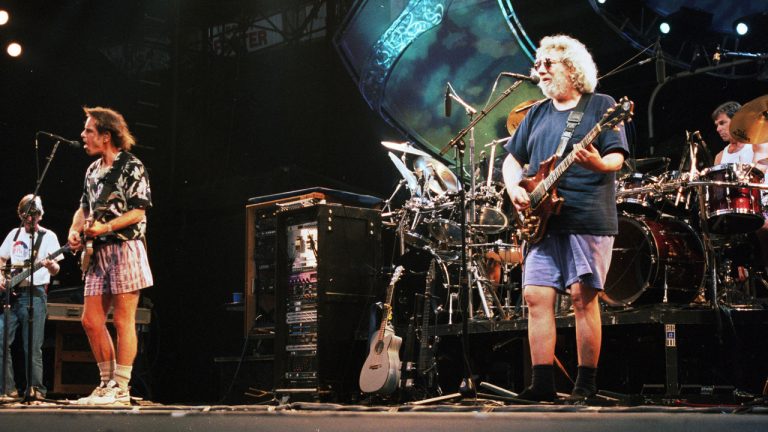 The now-deceased and former lead guitarist for the Grateful Dead, Jerry Garcia, will have a rare piece of his artwork sold as a non-fungible token (NFT) collectible asset. The NFT is a digital piece called “Gift” and is being sold by the Jerry Garcia Foundation, a nonprofit that supports “environmental, artistic and humanitarian causes through the beauty of music and art.”

‘One Man Gathers What Another Man Spills’

On May 5, The Jerry Garcia Foundation released a newly minted NFT for auction called “Gift,” a piece of artwork crafted by the late Grateful Dead guitarist. The Grateful Dead was a well known American psychedelic rock band that formed in 1965 and toured up until 1995 playing approximately 2,350 shows.

Moreover, the Dead had a massive following known as “Dead Heads,” as thousands of individuals followed the group around the world. The Dead’s lead guitarist Jerry Garcia was not only an extremely popular musician, but he also dabbled in fine art as well.

The Garcia art that was listed on Wednesday is held on the NFT marketplace Superrare.co, and the Jerry Garcia Foundation wants 309 ETH. Currently, the 309 ETH listed value of Garcia’s “Gift” is worth over $1 million using today’s ether exchange rates. The Superrare seller is titled “@jerrygarcia” and the author description tells a little bit about the Dead guitarist’s life. The SF Chronicle notes that the Jerry Garcia Foundation plans to donate a portion of the NFT’s auction proceeds toward the preservation of coral reefs.

The auction house Superrare also has a description written on the NFT as well.

“Meeting ‘Gift,’ he greets us just landing, coming into our view from blue sky-walking and fluffy cloud-surfing. We see the congenial face of ‘Gift,’ a smiling forward-thinking interstellar being. He plays a musical staff,” a summarized description of the NFT notes.

We experience his colorful epiphany of giving and receiving in a range of rainbow hues- purples, reds, oranges, yellows, greens, and blues. We experience “Gift” as a realization of gratitude, an uplifting vision perceived through tangible abstractions. Familiar forms and geometric shapes adorn his garment. “Gift” plays by ear.

2021 has been a phenomenal year for digital artists and creators of NFTs. Statistics from the last seven days alone show there’s been 127,393 sales worth $321 million, according to nonfungible.com’s market history. Further, a large swathe of luminaries, socialites, and celebrities have been jumping on the NFT bandwagon. Bitcoin.com News recently reported on NFTs from the hip-hop phenomenon Eminem and a set of rare photos of Kurt Cobain turned into collectible NFTs.

As far as the Jerry Garcia NFT is concerned, currently, there is a bid for the artwork at 35 ETH or $122k using today’s ether exchange rates. The bid below that is for 4 ETH or $14k worth of ethereum for the NFT art.