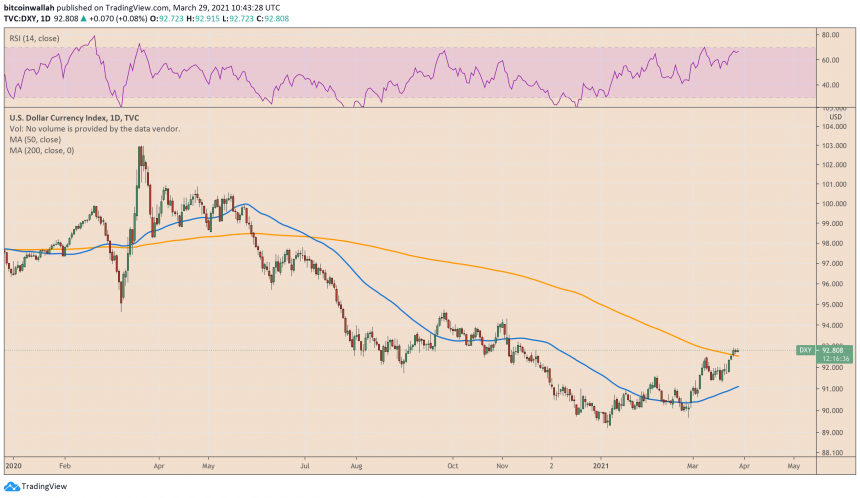 Bitcoin prices rose aggressively heading into the European session Monday, breaking above $58,000 as traders pinned their hopes on another all-time high milestone ahead.

The benchmark cryptocurrency was changing hands for $58,146 at 10:18 UTC, up 4.25 percent from its intraday open. A record expiry of $6 billion worth of options contracts on Friday helped ease downside pressure in the Bitcoin market as the spot price rallied towards the bullish strike rate of $55,000.

More tailwinds for the cryptocurrency came from a struggling US market on Monday.

Futures tied to Wall Street indexes, including the S&P 500 and the Dow Jones Industrial Average, slid in the pre-market session, pointing to losses after the New York opening bell. The indexes’ futures incurred losses after a large investment fund dumped billions of dollars in holdings, stoking concerns that global banks who dealt with the firm could face heavy losses, as well.

The move was by Archegos Capital Management, an investment firm owned by former Tiger Asia manager Bill Hwang — a fund manager with a history of participation in wire fraud. The firm unwound $30 billion worth of holdings in a handful of companies, including Discovery and ViacomCBS, leading to massive crashes in their stock rates.

Bitcoin held its gains by then, undergoing a modest downside correction but nothing that could offset its early morning gains.

On Monday, Credit Suisse Group and Nomura Holdings admitted that they suffered substantial losses from their US client dealings. The banks did not name Achegos Capital directly.

Shares in European markets were trading flat after getting weighed down by the Credit Suisse shares. The pan-European Stoxx 600 was up 0.31 percent after erasing most of its early morning gains tied to mining, oil & gas, travel, and leisure shares.

Bitcoin does not have any correlation with stock markets. But the cryptocurrency still tends to react to the trends on Wall Street erratically. It had crashed by almost 60 percent in March last year in just two days amid a global market rout.

Nevertheless, Bitcoin lately started reacting to developments in the US bond market. A sharp climb in the benchmark 10-year Treasury note in the week ending February 28 coincided with a 21 percent decline in the Bitcoin market.

The cryptocurrency later recovered its bullish momentum, hitting even a new record high, after the bond yields stabilized near their 14-month peak. Interest rates for the 10-year note were stable on Monday, as well, dropping to 1.657 percent. Yields drop when the bond prices rise.

The BTC/USD exchange rate has broken out of a bullish continuation pattern after its latest move upside.

Dubbed as Bull Flag, the pattern hints at a breakout upward by a length equal to its previous uptrend’s height. That somewhat puts the bitcoin price target way above its previous all-time high at $61,778 (data from Coinbase).

Meanwhile, a downside correction as Bitcoin’s Relative Strength Indicator crosses 70 would indicate a potential decline towards the blue wave (it is the 50-4H simple moving average).

Photo by Robert Bye on Unsplash